Before I dive into the gritty details of building my custom crypto mining room, here is a quick walkthrough of the completed closet sized room:


One of the biggest issues every serious crypto miner faces, is that the room their mining rigs are in starts to get warm. And when the room is warm, the graphic cards start to get hot and consequently under-perform. This is NOT good!

When I first faced a similar issue, I quickly decided to add small cool-looking fans to my open-air-concept rigs. The fans of course helped a bit – as additional air got pushed at the graphic cards – but one thing it did not do was keep the room cooler.

In fact, the fans added “noise” as an additional annoyance-factor. So – at night – we’d close the bedroom doors just to keep the noise out while opening all living room windows to let air pull through.

This is when I discovered the third problem: Dust. Living in the desert where winters can get very dusty, you want to keep doors and windows closed as much as possible to keep the dust out. I quickly realized that open-air mining rigs weren’t going to work for me. At least not if I wanted to scale the operation.

It was right about this time that we purchased our first home, and I promised my wife I would get the mining rigs out of the living room and into my office. But again all the same problems arose. The office got too hot – forcing me to leave doors and windows open again – and then I had a dust problem.

On top of that, all the fan noise was starting to get to me and everyone else. I knew I had to do something different. 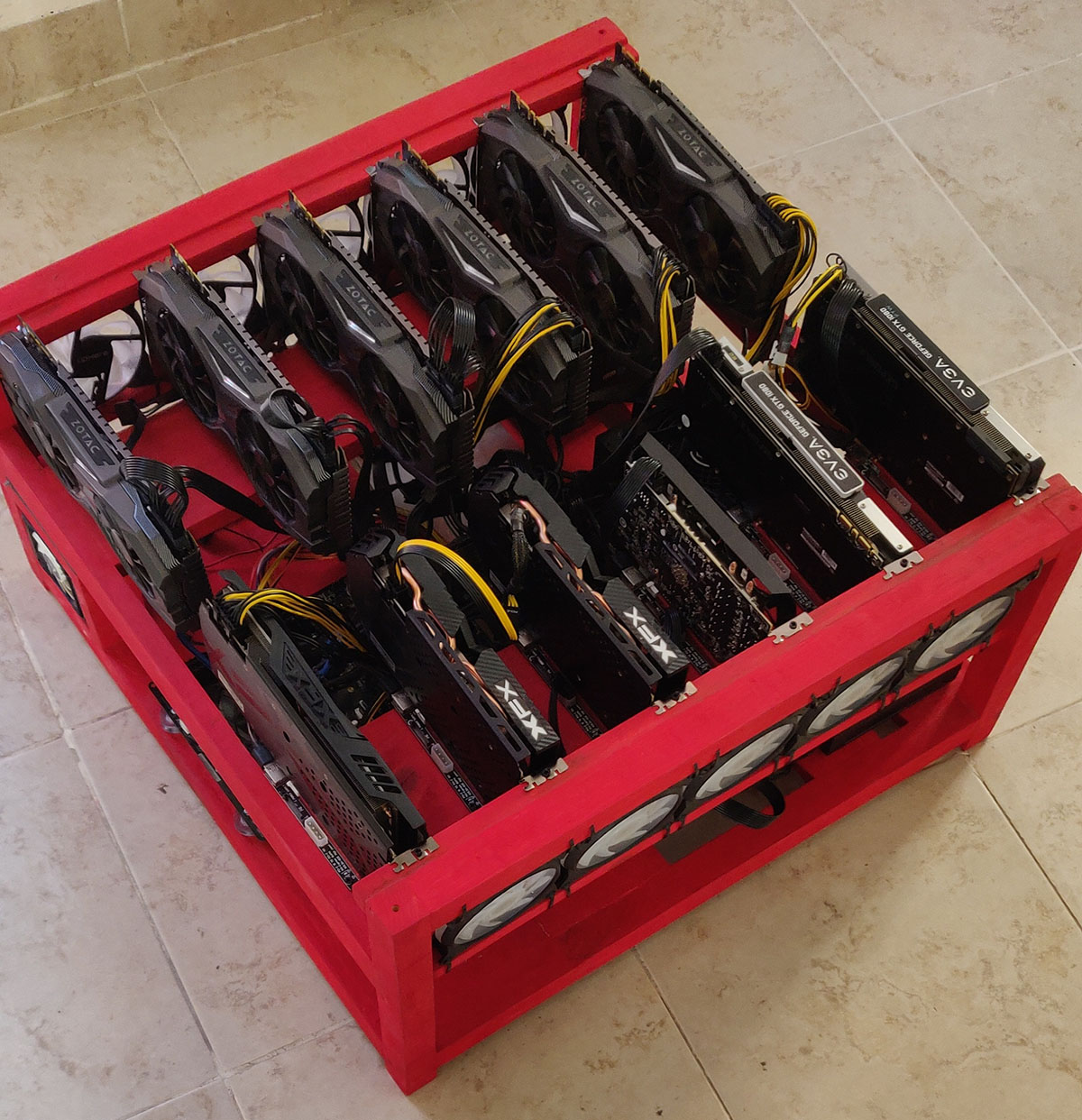 I considered building a small stand-alone building in our yard that would have plenty of windows all around to keep with the “open air” concept. I figured I could put basic air filters in the windows and that would keep the dust out while – hopefully – the hot air would escape through the windows (as fresh air would come in).

I still very much like the idea of that, but I also realized how inconsistent wind is when you don’t control it. And when you plan on scaling your mining capacity, you want to have as much control as possible. So, being at the mercy of the wind was starting to sound less and less appealing.

Hours of research later, I came to the conclusion (based on things experienced miners would share) that removing hot air from the rig’s environment is as (if not more) important than pushing fresh air at it. And so, with much hesitation, I started looking at different “forced air” mining-rig cooling ideas.

One guy that really inspired me was TwoTon Hasher on YoutTube who built these square wooden boxes with large industrial fans on top that were sucking out the hot air while pulling fresh air into the box through filtered “windows” at the bottom.

I considered doing something like that as well, but was hoping to do something a bit more secure – as I wasn’t sure where I could safely put those boxes. And this is when I decided to build a closet sized mining-room addition to my office.

Here in Mexico, most homes are built with brick and mortar and not wood or drywal like many other places. Needless to say wood construction material is harder to come by here. Which is why I opted to build with brick and cement as well despite knowing it would take a lot longer to build.

To get started, I had to do some… 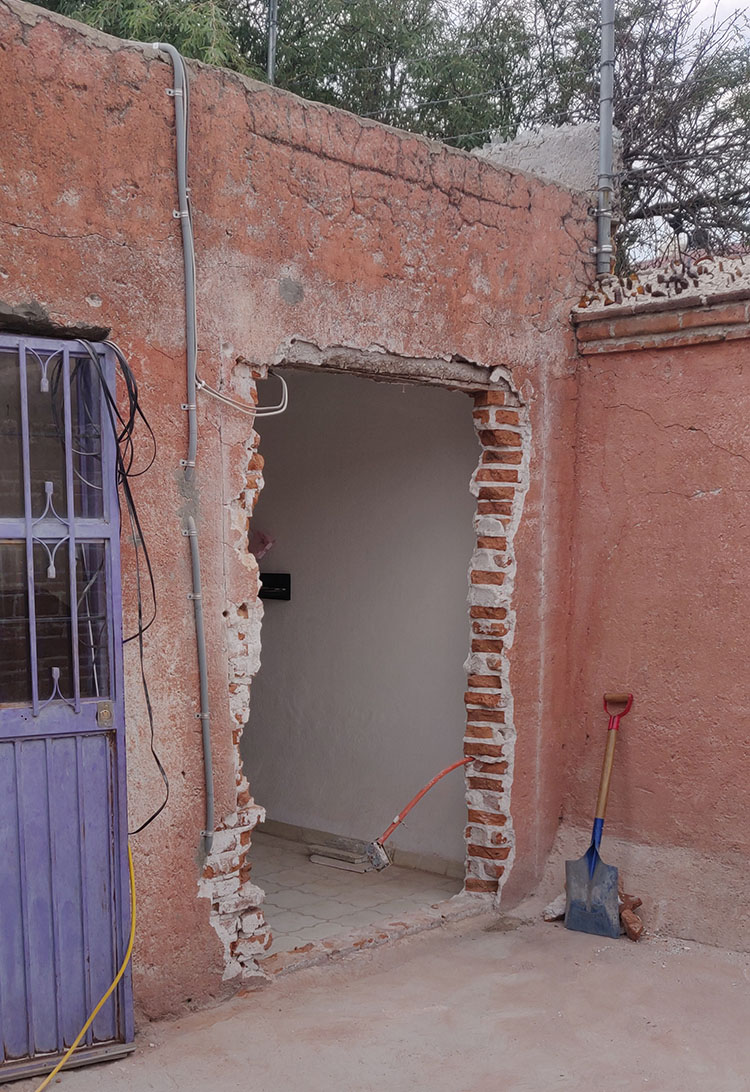 My office had a tiny window leading outside, and I decided I would rip it out and put a door in there that would only be accessable through my office and would lead into the mining room.

This was important to me for a couple of reasons:

Lucky for me the room had a rebar enforced poured concrete frame on top of the wall that was keeping the roof in place, so I could safely knock that door-sized hole in the wall without compromising the structure of the room.

I started this early morning to get as much of the door installation done before dark as possible. Doing this all yourself is hard work, but I got it done. 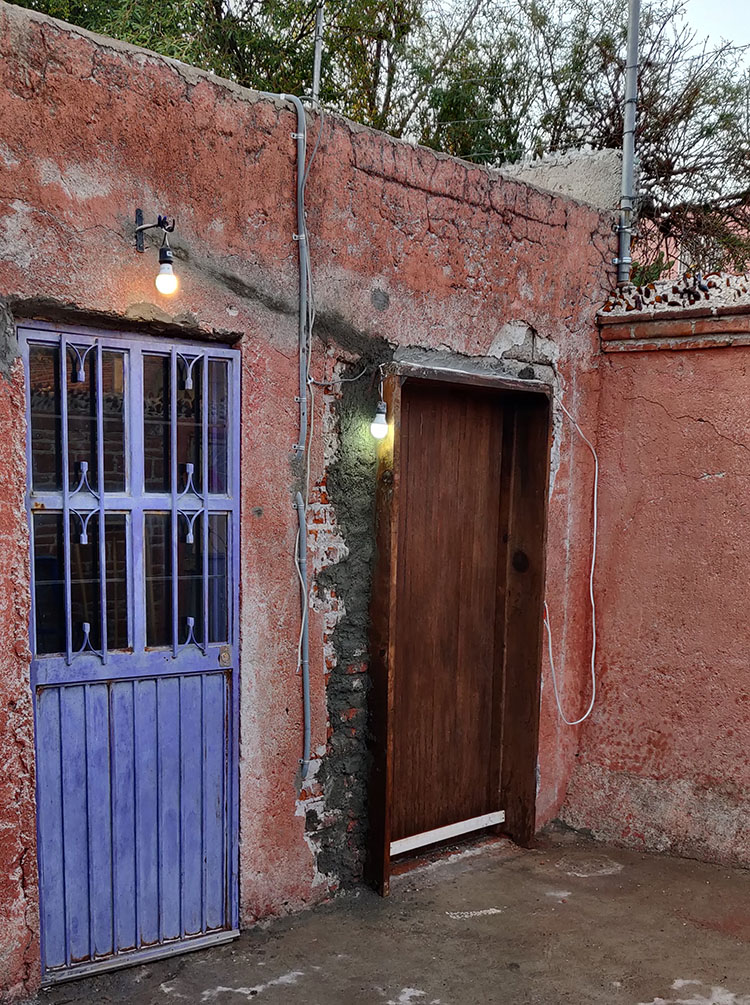 Because there was already a poured cement floor outside, I did not make a big deal out of the foundation aside from laying the first layer of bricks side by side to give the room a slight wider stance. 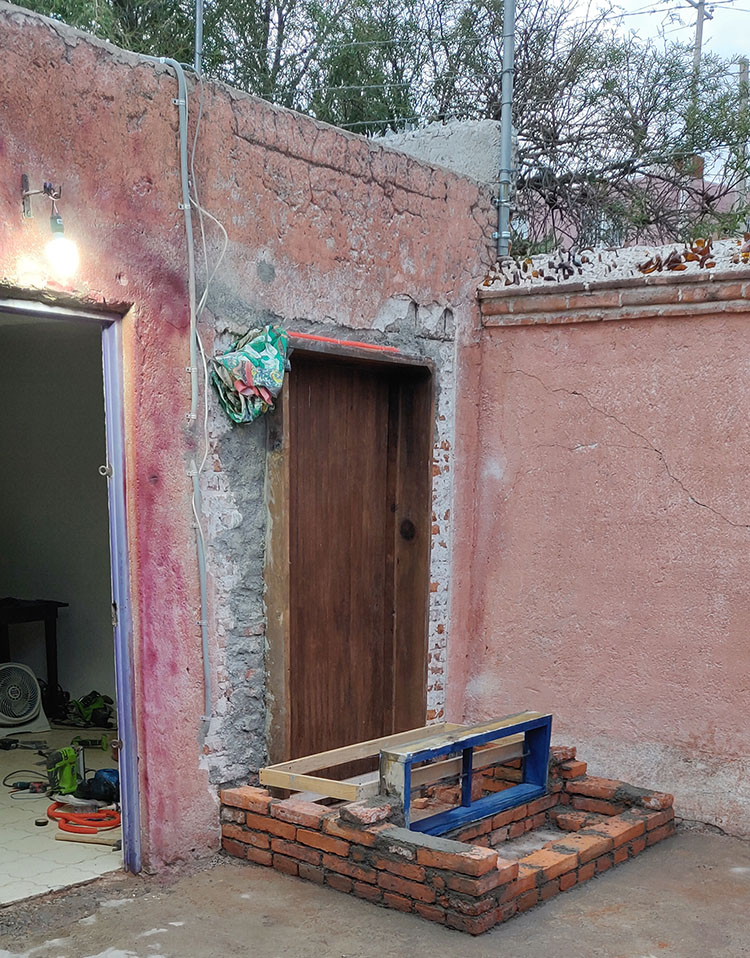 Next up was planning the…

In hindsight I over-did this step. I just added up how many devices I can plug directly into the wall without using extension bars or splitters, and it’s 44. Which is crazy. I use maybe 10 right now and I am at half capacity, hah!

Better a few too many than not enough, right?

I am no electrician, but did thorough research on what wires I should use (each 2 individual outlets have their own 12 gauge wire going to them), what wall plugs I should use (I used 20 AMPs rated ones), etc. The electrical setup was the last thing I wanted to get wrong.

I planned out all the wires and put them in place while I was building the. The electician ended up pulling a ground through for each outlet, but said everything was perfect otherwise. That was a huge relief for me 🙂

I had planned on hiring someone to do it, but the guy I had in mind was in the middle of another project, and so I figured I’d try my hand at brick-laying.

Every evening I’d spend an hour or two building the the walls. In hingsight it was a LOT of work, but the experience I gained from it is invaluable to me. And besides: How many people can look at a structure and say “I built that with my own two hands!”? 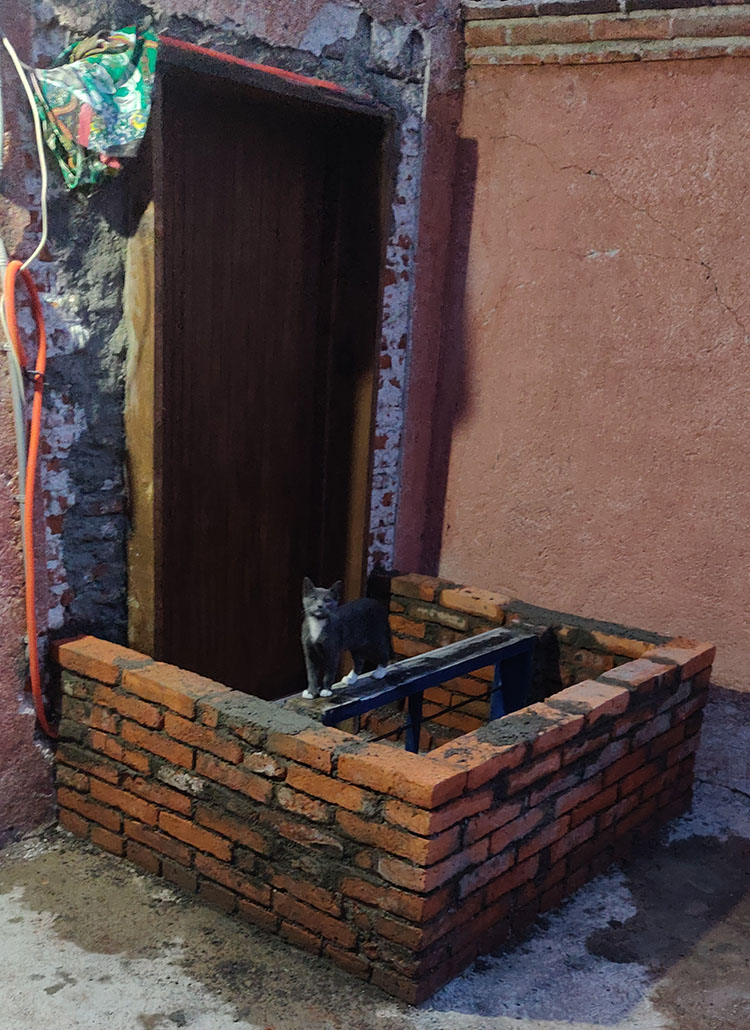 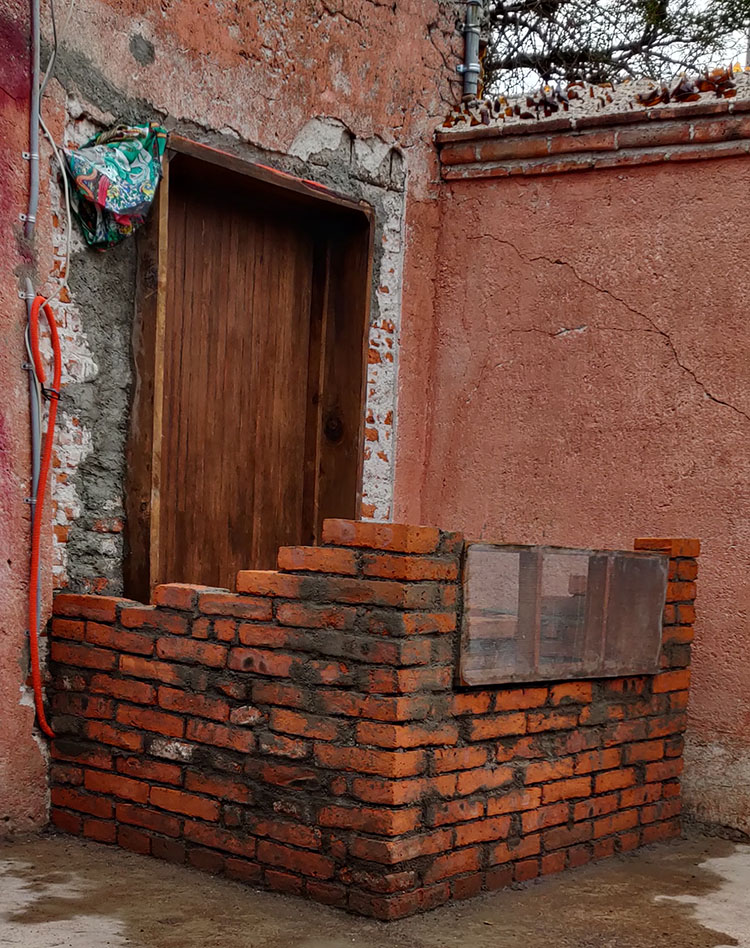 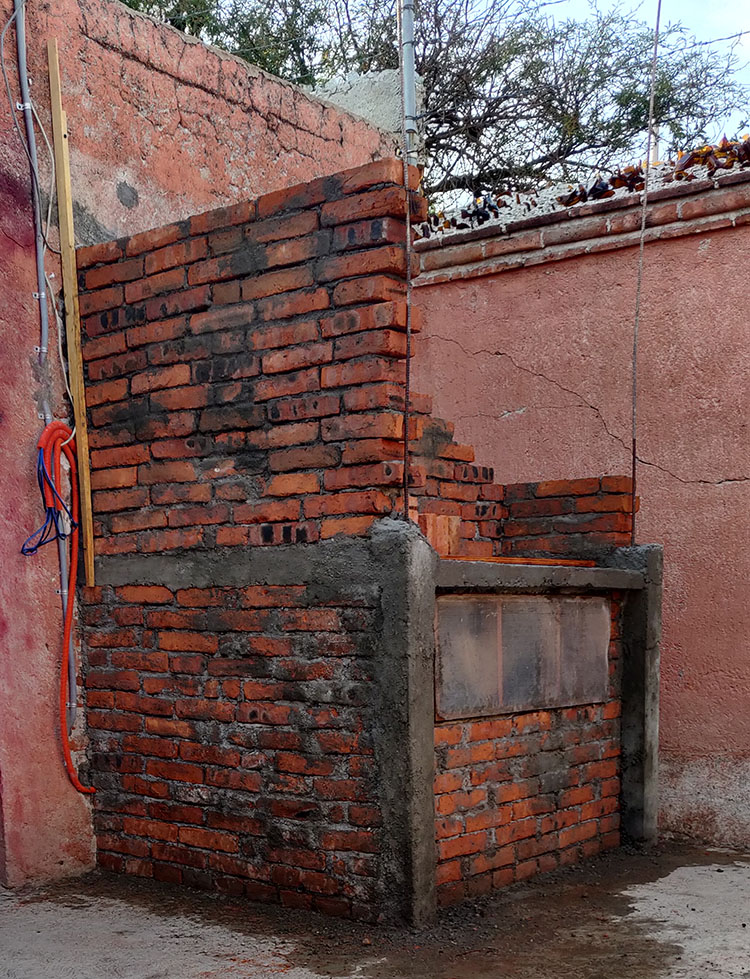 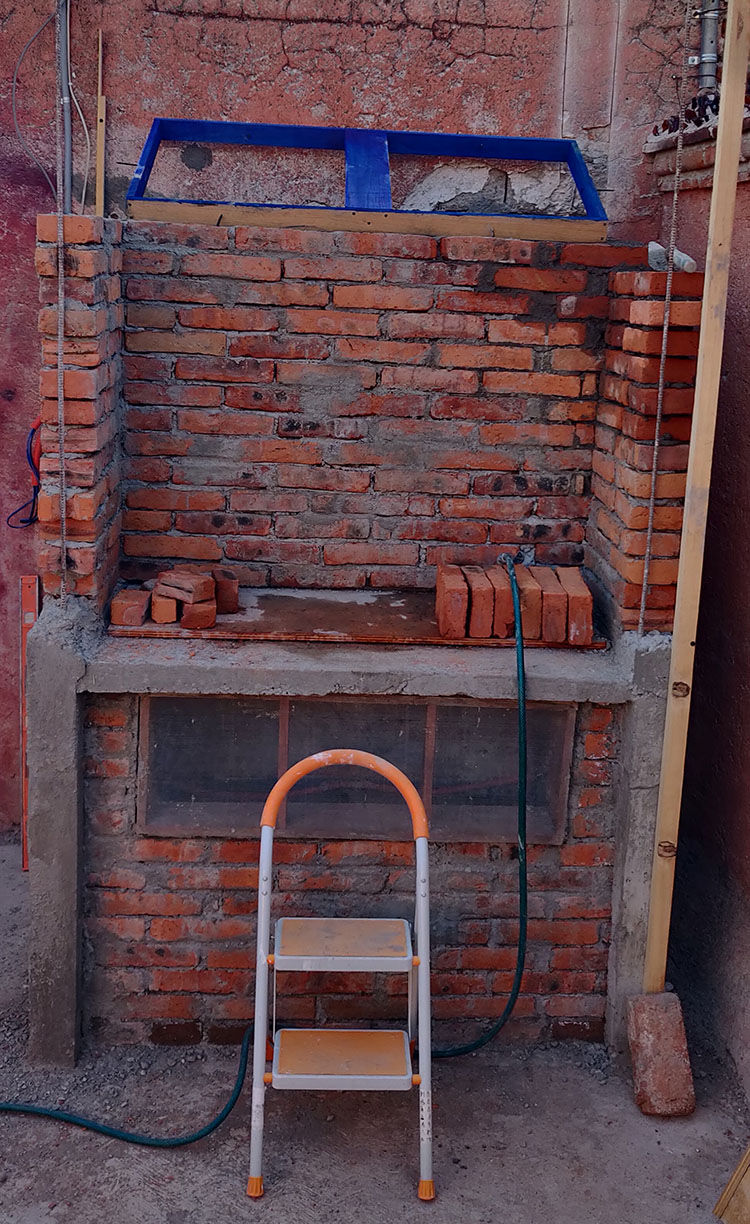 Once the wall was done, I moved on to the…

Having very little experience in building structures, the roof was the one part I was the most undecided about. I kept changing the plan for it every other day. And in hindsight I would change it again, but it does what I need it to do. 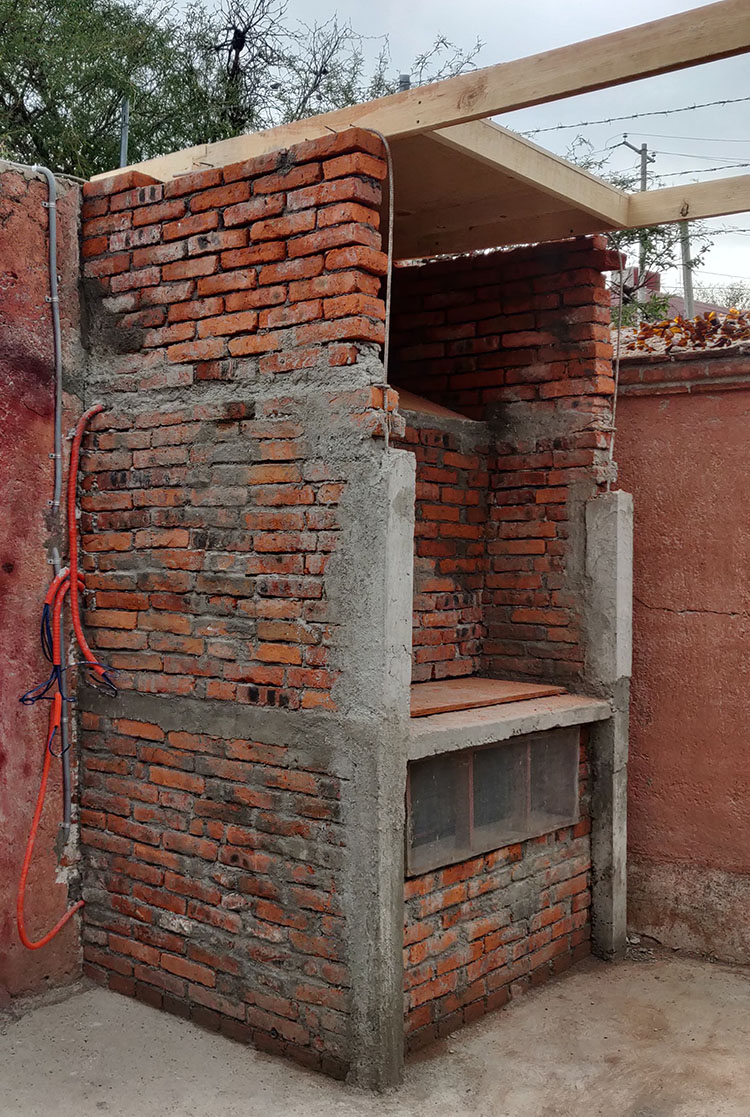 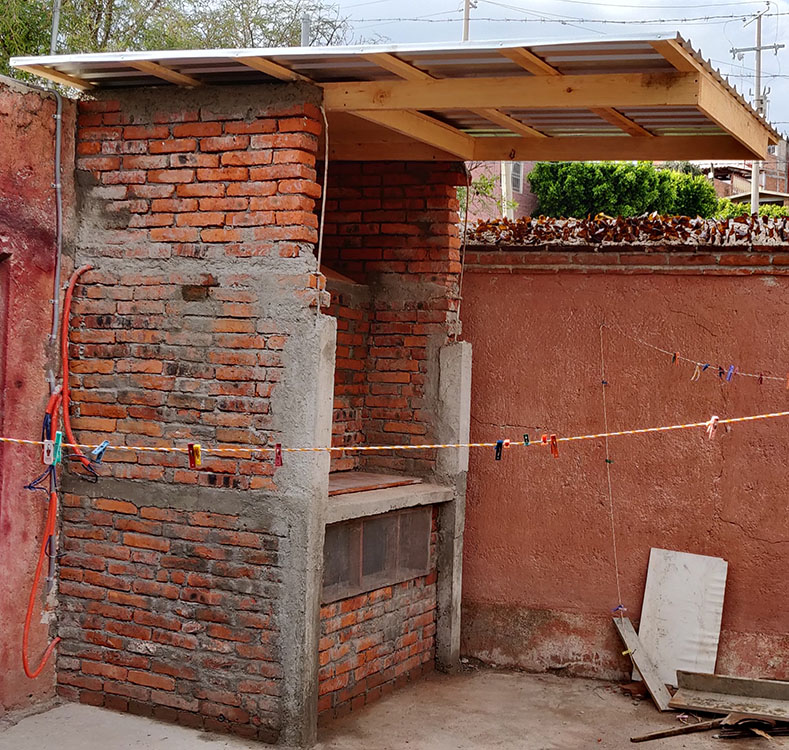 I opted for a tin-sheet roof just because they are reliable and readily available here. Yes, they get loud when it rains (or hails) but it being at the back of the house, it doesn’t bother me.

I wanted a 2.5 meter roof but ended up with 3 meters instead because that (or 2 meters) was what they had at the hardware store. Again, erring on the side of too much instead of too little, I went with the longer sheets, had the hardware store deliver them, and then I installed them on the wood frame/beams I had built and installed for it (at a 6″ slope).

Again, I had not planned on doing all the work myself, largely just because I did not have the construction experience, but I did everything up to this point by me-ole-self.

So to finish the walls and finalize the electrical installation, I brought in an experienced builder/electrictian. He grounded each of the outlets while adding an additional breaker box to give me more control (and safety) specifically for the mining room.

Overall he kept complimenting the work I had done with the wires etc which was a huge relief for me… confirming that all my research had paid off.

Him and his helper also finished up the walls (with cement, limestone, and sand mix). Again he was impressed at what I had done with no experience. I laughed it off showing him a few bulges in the wall but he insisted a lot of “maestros” do worse brick-laying, and just hide it with the finishing, hah!

Setting Up the Rigs!

5 weeks after smashing the hole in the wall to install the door – came the moment of truth: Is it going to work?

The room was done at this point, and it was time to paint the room and get the mining rigs set up.

I installed the first shop fan on top (20″ rated at 6000 CFM at full speed) pushing air outward. I turned it on while stepping into the room and closing the door.: Boy… I was chilly in no time. It made me realize the second fan would be overkill considering the small room-size, but I installed it anyway just in case of ultra warm days.

The second fan is a bit smaller (only 18″ rated at 4500 CFM) and uses a little less electricity, but even just that one is plenty. Especially during cooler nights!

Next I installed the framework needed for the rig setup, and installed the rigs. At first the GPUs were running a little warmer than I anticipated, but after optimising them for optimal watt to MH/s, they run nice and cool even on warmer days.

I installed 200mm PC fans beneath the GPUs that push the air up. They are super low wattage yet push decent CFM of air. This really wasn’t needed, but in my mind, GPUs can’t get too cool, and since I generally only run one of the big top fans at a time, these small fans will keep the air moving in case the big fan ever decides to die.

Call it an insurance plan 🙂

Overall I am very happy with the build. It does exactly what I need it to do and what I wished it would do:

It is only 49″ wide, about 25″ deep, and 75 inches tall (on short side), but it will comfortably fit 40 GPUs with the current setup (all GPUs are spaced 5″ appart). Seeing how nice and cool it keeps the GPUs right now, I could consider moving them closer together to fit another 8 in there (for a total of 48 GPUs), but in my mind I’ll start replacing the older cards with newer more powerful ones once I reach current-setup capacity.

So plenty of room for growth still.

With all that said, I now have a small mining room I can be proud of and that earns me more per month than renting out our whole house for the month would bring. So… a triple win in my books.

PS: – I was teasing my wife we should get more rental properties as I love the rental income. She asked me what I was talking about. I told her to follow me… and showed her my Krypto Kave (the mining room). Hah!

This site uses Akismet to reduce spam. Learn how your comment data is processed.